Following World War II, a sudden rise in population led to deteriorating water conditions in the Toyohira River that flows through central Sapporo. Because of this, salmon weren’t able to return to the river to spawn for a long time after the war.
In the 1960’s, the sewer systems in the area were improved, which led to improved water conditions in the river.
In 1978, the Come Back Salmon Movement was started with the mission of getting salmon to return to the river. The following year, in the spring of 1979, the river was stocked with juvenile salmon for the first time in 30 years.
Those salmon eventually returned to Toyohira River in the fall of 1981 for spawning. Upon seeing the salmon, local residents began to push for a place that could hatch salmon and stock the river as well as for a place to learn more about salmon.
In response, the Sapporo Salmon Museum opened in October 1984.
Presently, in addition to hatching and stocking, the museum also has displays on salmon and other freshwater fish found in the Toyohira River, and provides a variety of information about the river and the salmon.
In recent years, the number of salmon that return to the Toyohira River to spawn numbers around 1000, of which over half are wild salmon that were naturally spawned. In order to increase the number of wild salmon in the river, the Sapporo Wild Salmon Project was started in 2014, and the museum acts as a headquarters for the project.

The main building primarily houses the museum’s many exhibits. Throughout the year around 20 species of salmon and related fishes are on display.

Exhibit Hall
Visitors can learn more about spawning behavior and spawning beds through dioramas with taxidermy models. Videos on the Come Back Salmon Movement and efforts to conserve the Toyohira River salmon are regularly shown.

Aquarium Exhibit Room
The Aquarium Exhibit Room displays juvenile salmon and other related types of fish. Visitors can also see fish that live near the source of the Toyohira River that are rare elsewhere in Japan such as Dolly Varden trout, Atlantic salmon, lake trout, and cutthroat trout.

Hatching Room
Here salmon eggs are collected, fertilized, and hatched. During spawning season, visitors can watch the process through glass.

Underground Observation Room
Salmon and other related fish are displayed by size. The types of fish on display changes with the seasons. From winter to spring, visitors can see the swarms of juvenile salmon. In fall they can see the adult salmon.

Visitors can see over 30 species of freshwater fish and animals that are found in and around the Toyohira River and Sapporo including Japanese dace, gobies, frogs, turtles, and salamanders.

Visitors can try feeding Japanese huchen and salmonids in this outdoor pond.

There are three river systems where salmon run and spawn in Sapporo. Information on each of them is presented below. 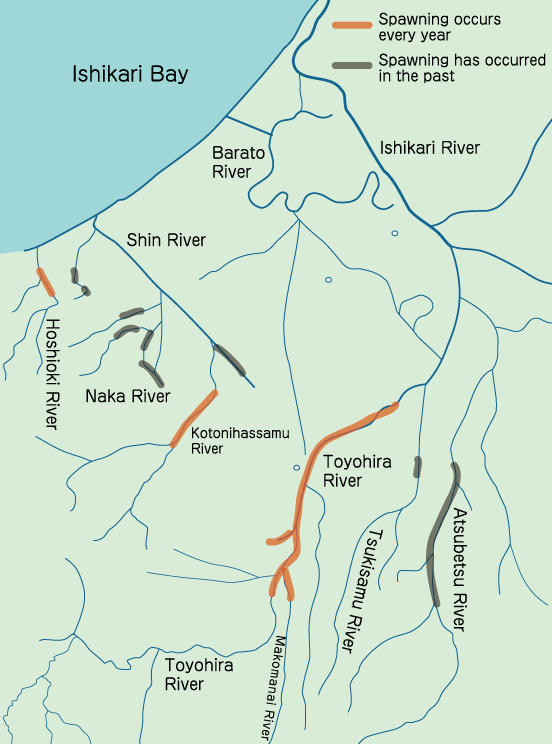 Toyohira River (Toyohira River System)
Thanks to the Come Back Salmon Movement, salmon have returned to the Toyohira River. Every year around 1000 salmon return to the river to naturally spawn. Since 2014 the Sapporo Wild Salmon Project (SWSP) has been working to increase the number of wild salmon in the river.

Hoshioki River (Hoshioki River System)
The Hoshioki River is a small river that runs near the border between Sapporo and Otaru. Around 100 salmon spawn every year about 1.5 km to 2 km from the river mouth. The spawning takes place from National Route 5 (Hoshioki Bridge) downstream to just near Hoshimi Ryokuchi Park.